Launching in late 2024, Space Perspective, a space tourism company, will bring thrill-seeking travelers and wannabe astronauts alike to the “edge of space.” In its recently released renderings the company shared the design for the exterior of the orbiting capsule, Spaceship Neptune, which features a bulbous shape with panoramic windows. […]

Launching in late 2024, Space Perspective, a space tourism company, will bring thrill-seeking travelers and wannabe astronauts alike to the “edge of space.” In its recently released renderings the company shared the design for the exterior of the orbiting capsule, Spaceship Neptune, which features a bulbous shape with panoramic windows.

The space shuttle is being touted by Space Perspective as “carbon neutral” in its design and functionality. No rocket fuel will be required for take off; instead a massive high-performance SpaceBalloon will propel the spacecraft beyond Earth’s surface. The design by Dan Window and Isabella Trani, co-founders of London-based design studio Of My Imagination, mimics that of a traditional balloon or parachute take-off and landing.

“Centuries of balloon and parachute operation and development demonstrate that always flying with the balloon from launch through landing, with traditional parachutes as a reserve backup system, is by far the simplest, safest and most robust solution,” explained Space Perspective Founder Taber MacCallum in a press statement. “Our proprietary flight system means that the capsule and SpaceBalloon™ always remain connected, and take-off and landing conditions are always within our control.”

Its balloon-like shape was chosen by the design and engineering team, which also included experts from Siemens and AWS, for several reasons: it allows for maximum comfort and headroom inside the spacecraft and its form is ideal for “pressure resistance” and “splashdown” landings on a myriad of surfaces. The design is optimized for landing on water, deemed to be the safest touch-down technique by NASA. Its patent pending splash cone is designed for soft landings in a body of water, upon arrival the crew, passengers, and SpaceBalloon will be ushered onto a ship and taken ashore.

A reflective coating on the windows will repel solar gain and a thermal control system will insulate the comfy lounge-like interiors from outside elements, including inevitable temperature fluctuations. With windows wrapped around the entire vessel passengers will never be without a view. 360-degree cameras equipped inside offer space tourists the ability to zoom closer onto the vista.

Space Perspective and Siemens trialed numerous designs and executed a number of tests and simulations before landing on this one and also worked closely with AWS Cloud servers to realize the technology.

Interiors of Spaceship Neptune were first unveiled in April, showing a design that take first class to new heights, literally. Extra pluffy armchairs and circular sofas abound with personal bars, mini-fridge included. A digital screen wraps around the interior pod displaying key facts about the journey, including the current time, altitude, and the ground destination below.

Manufacturing of the Spaceship Neptune has already started at the Kennedy Space Center in Florida. The team has a testing area sized at 300,000 square feet, with another 100,000 for facilities.

Space Perspective has already sold almost 900 flight tickets. Journeys to the edge of space will kick off in late 2024 and are expected to take a total of six hours. Tickets cost $125,000, payment by credit card or crypto.

Fri Jul 29 , 2022
Today’s outdoor kitchens are more elaborate than ever. These exterior spaces offer generous layouts, luxe materials, and cutting-edge appliances comparable to what one would expect in a high-end chef’s kitchen. Whether the goal is crowd-pleasing backyard dinners or casual family grill nights, a well-designed outdoor kitchen will improve both the […] 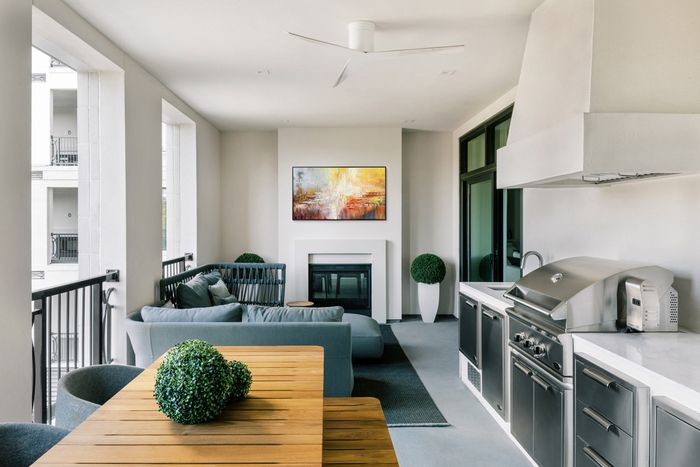