The postmodern design movement spanned over two decades, starting with architecture in the 1960s, although its heyday was from about 1970 to 1990. It was a robust rebellion against the minimalist concepts of modern design. Postmodern design embraces unconventional ideas with an emphasis on playful, artsy and extravagant style. Table […]

The postmodern design movement spanned over two decades, starting with architecture in the 1960s, although its heyday was from about 1970 to 1990. It was a robust rebellion against the minimalist concepts of modern design. Postmodern design embraces unconventional ideas with an emphasis on playful, artsy and extravagant style.

The Dawn of a New Era

The Bohemian culture of the hippies in the 1960s paved the way for a new era of creative expression in art, music, fashion and design. Flower power and free flowing hair was followed by expressive architecture with a twist on forms and symbolism and this influence eventually became cutting-edge style for interiors.

The two biggest sources driving the Postmodern movement were American architecture and Italian radical design, according to Glenn Adamson, a curator of the “Postmodernism: Style and Subversion 1970-1990,” exhibition held at London’s Victoria and Albert Museum. Form did not follow function in the brazen concepts of postmodern design. It was an abrupt departure from the understated, minimalist ideals of modern design.

Robert Venturi is credited with one of the earliest examples of postmodern architecture – a house he designed for his mother. Completed in 1964, the Vanna Venturi House has an unusual façade that is both simplistic and complex in its contradictory design. The pitched roof gives the house the shape of a child-like drawing. Ignoring the Modernist tenet that decoration has no place on buildings, Venturi and his design partner, Denise Scott Brown, added functionless features such as a non-supporting arch and a large fake chimney. Asymmetrical size and placement of the front windows is yet another broken design rule the pair employed in defiance of the Modernist principles of symmetry and clean, uninterrupted lines and form.

Inside the home, Venturi toyed with the concepts of scale, implementing an oversized fireplace and an undersized staircase leading to nowhere. His radical, unconventional designs are recognized by Chicago public television station, WTTW (Window to the World), as one of the 10 buildings that changed America. Robert Venturi also wrote books about his architectural concepts denouncing the barren principles of modernism in Complexity and Contradiction in Architecture (1966) and Learning from Las Vegas (1972).

Past influences play a significant role in postmodern design but tend to have an eclectic or progressive twist. The key principles of Postmodernism were complexity and contradiction. The utopian perfection suggested by modern design was replaced with deconstructivism and the aesthetic of an urban apocalypse.

In the late 1970s, architect Frank Gehry took his Santa Monica home apart and literally reconstructed it in a way that appeared devoid of a coherent plan. He applied impulsive transformations that seemed to exist without a clear reason:

Gehry’s use of corrugated metal panels as a decorative siding on the outer walls of his radical home modifications was also ahead of its time, as this look was more common of barn roofs than of suburban homes. Gehry went on to design some of the most complex and unusual museums in the world.

Punk Is in the House

The subculture and anti-establishment philosophies of the punk era were also right in line with Postmodernism. Vivienne Westwood was the mastermind that created the deconstructed punk fashion of the 70s and early 80s. In 2009, she teamed up with Cole and Sons to create a collection of wallpapers which are now going for a hefty price at 1stdibs. Westwood also brought some British subculture to The Rug Company in 2006, where the tattered, worn out remnants of the Union Jack flag are reproduced into expensive, high-end rugs, wall tapestries or accent pillows.

In the “designer decade” of the 1980s, everything became a style statement. Postmodern characteristics of vivid colors, theatrical shapes and exaggerated forms became the dominant look in fashion, furniture and accessories. 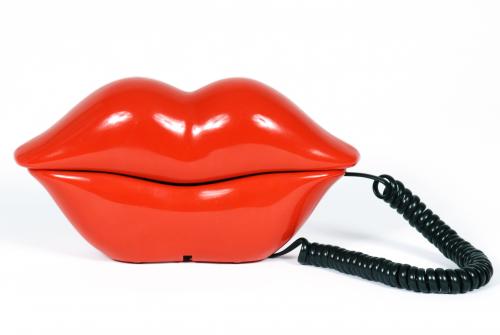 Cutting-edge graphics in art, magazines and music videos energized a new, post-punk subculture that spread on a global scale. Publications like Domus highlighted the look of new, radical furniture styles from Italian designers such as Studio Alchimia and Memphis. The late musician, David Bowie, was a huge fan and collector of Memphis designs. This was New Wave and image was everything.

During the late 20th century, Italy became the global center of design, thanks to design maestri or “master” designers such as Alessandro Mendini and Ettore Sottass.

W magazine cites Alessandro Mendini as being at the heart of Italy’s radical design movement during the 60s and 70s and later, Postmodernism. Mendini was instrumental in bringing awareness to the movement through his contributions to Italian design magazines including Casabella, Modo and Domus.

As a designer, Mendini created pieces that were flagrantly showy, with bold colors and flamboyant patterns. His most famous design is the 1978 Proust Chair. Mendini “redesigned” an ornately carved, wood-frame Baroque armchair with white upholstery by projecting a slide onto it and hand painting a pointillism pattern all over it. The chair was redesigned with a wild array of multicolored patterns decade after decade, as can be seen in this 2009: Proust Geometrica.

In 1979, Mendini and a handful of other avant garde designers, including his friend and colleague, Ettore Sottas, joined forces to form Studio Alchimia. Mendini injected a sense of humor at Modernist ideals that excluded the use of bright colors and exaggerated forms by creating vibrantly colored objects with theatrical shapes and kitsch motifs.

Alessandro Mendini is often mistakenly named as a member of the Memphis Group, as he did design a piece for their first collection in 1981. However, Mendini told W Magazine he declined Sottass’ offer to join, as he wanted to remain with Alchimia.

In 1981, a group of like-minded designers in Milan took the postmodern design movement to a whole new level with their debut of bold, graphic furniture designs at the Salone del Mobile. Founded by designer, Ettore Sottass, the renowned Memphis Group included Peter Shire, Michael Graves, George Sowden, Michele De Lucchi and Nathalie Du Pasquier, among others.

With bold, clashing colors, unconventional shapes and wild patterns, Memphis pieces were designed to communicate ideas. The influential look of Memphis furniture included combinations of overtly geometric shapes made from a variety of materials in bright, contrasting colors. Graphic black-and-white patterns were also common. This overstated, almost cartoonish style reigned for much of the 1980s. Here is a brief look at three of its founding members:

Ettore Sottass helped define the look of postmodern furnishings with his use of brightly colored laminates, graphic forms and nonfunctional elements. His iconic Carlton bookcase featured colorful, angle shelves and bookends disconnected from one another. It challenged the notion of why a bookcase needs to look like a typical bookcase. 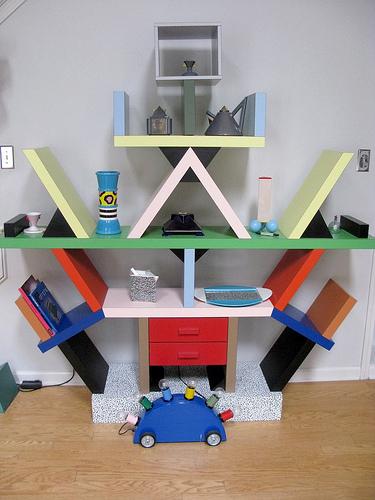 George Sowden, an award-winning electronics designer for Olivetti, became a founding member of the Memphis group, along with his girlfriend/soon-to-be wife and design collaborator, Nathalie Du Pasquier. You can see a portfolio of Sowden’s Memphis pieces at Sowden Design.com, which includes colorful cabinets, whimsical chairs and clocks with bold, flashy patterns.

Nathalie Du Pasquier is primarily an artist that lent her talent to the Memphis group in the form of eye-catching, powerful patterns used on textiles, upholstery and painted furniture. When Memphis broke apart in 1987, Du Pasquier returned to painting and sculpting in her Milan studio. When interest in Postmodern style emerged in the second decade of the new millennia, Du Pasquier resurrected her retro designs in a collaboration with American Apparel. You can buy accent pillows, bath and beach towels featuring Nathalie Du Pasquier’s patterns at the Finnish Design Shop, which is located in Finland but offers worldwide shipping (click on the link for US Deliveries in the upper left corner). 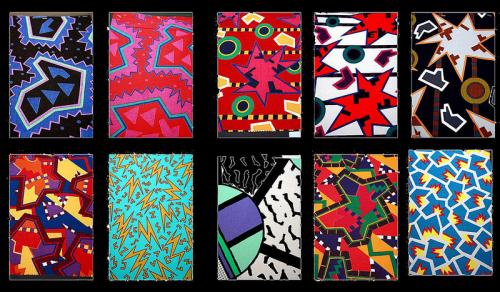 Love it or hate it, Dezeen announced the return of Postmodernism in the summer of 2015. The cutting edge design and architecture site featured a summer long series celebrating the legacy of Postmodernism affectionately titled, “Pomo summer.” Fueled by exhibitions such as “Style and Subversion” at London’s V&A museum in late 2011 and Li Edelkoort’s Totemism show in 2013, a new Memphis trend in 2014 helped resurrect the Postmodern look; a style influenced by the extravagant Art Deco era, the whimsical vibes of Pop Art and reinterpreted motifs of the past.

Designer furniture and accessories are usually expensive, especially when they are vintage originals and of Italian design. Although a room full of radical Memphis furnishings may only appeal to the eccentric clientele who can afford it, these eclectic accents can still be tastefully incorporated into other design schemes in smaller doses. This revolution of radical form went on to inspire other famous designers including runway fashion by Christian Dior and furniture by Matthew Sullivan.

Fashion icon, Karl Lagerfeld, was also taken by the cutting-edge style of Memphis-Milano designs and filled his apartment with Pomo style furnishings. Lagerfeld went with a soft, neutral gray on his apartment walls, which doesn’t compete with the bold colors of the furniture and accessories. 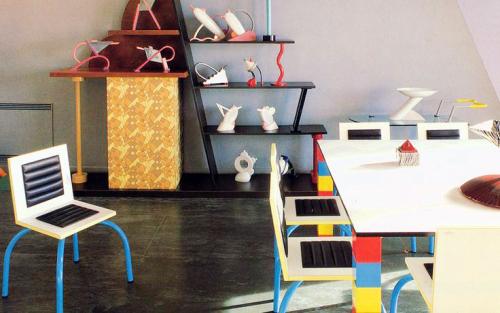 Sleek, stone flooring complements the glossy surfaces of the laminated furniture which includes:

Obviously, it takes a very high budget to deck out a room in vintage Italian furniture and accessories. But you can still inject a Postmodern vibe in your decorating scheme by following its principles of complexity and contradiction mixed with a retro touch of wit, kitsch or humor. 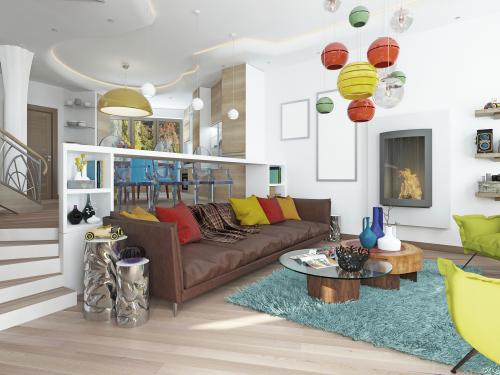 An artfully sculpted coffee table appears to have a top made from a large slice of Redwood log supported by laminate wood legs. The glass top of the second table cuts through the edge of the log slice, joining the tables into one. Sitting beside the brown leather sofa are stump shaped end tables covered in shiny, silver metallic foil with an interesting warped effect. The long, white shelf hovering over the couch appears functionless due to the crystal-clear, Lucite ghost chairs positioned on the other side. Other postmodern characteristics layered in this room’s complex design scheme include:

The room’s unconventional angles, the fluid lines in the ceiling’s cove lighting and the decorative column are hallmark signs of a postmodern aesthetic.

A Style that Defies Definition

Although the postmodern era spanned over a relatively short period of time, it’s a very fragmented design style that includes a cornucopia of expressionism and free thought. Postmodern design celebrates past motifs, flashy fads, a dystopian future and ludicrous forms. It’s a reflection of the volatile, fast-paced culture of the 20th century that challenged previous concepts about design and brought new recognition to style itself