We’re all at home now. And that includes the many politicians, reporters, professors, authors and medical experts who are being interviewed about the global pandemic on television news shows. As a result, viewers are suddenly seeing all kinds of home interiors in the background — but without the filter and […]

We’re all at home now.

And that includes the many politicians, reporters, professors, authors and medical experts who are being interviewed about the global pandemic on television news shows.

As a result, viewers are suddenly seeing all kinds of home interiors in the background — but without the filter and perfectionist lens of TV crews and production designers.

Consider Barbara Boxer, the former Democratic senator from California, who was interviewed on CNN about the need for more test kits. While many viewers were undoubtedly focused on the important points she was making, one could be forgiven for wondering:

Why is she standing in front of a large black fridge? And what’s up with the abstract artwork to the left of it?

When I called Boxer, she explained that she chose her kitchen because “it’s the sunniest room in the house,” adding, “I feel very comfortable in that room. I do a lot of thinking in it.” She also wanted to highlight the photograph by a friend, the well-known photographer Michael Childers.

Most of those being interviewed are using teleconferencing software such as Skype and can presumably choose where they place their laptops for the broadcast. But they are making some surprising choices all on their own.

The unusual backgrounds go unmentioned, understandably, because the focus is on the vastly more important crisis at hand. But when you’re confined at home, anxiously watching one news show after another for coronavirus updates, it’s easy to get distracted by the backgrounds and have questions. So many questions.

Take the MSNBC interview with Annie Lowrey, a writer who covers economic policy for the Atlantic. Behind her, a white crib sits between two light-filled windows, and she’s wearing large headphones.

Her comments on the crisis were smart, articulate and authoritative. But as a mother, this viewer was busy wondering: Is there a baby in that crib? Did she pick the room with the crib because her babysitter is staying home? Is she wearing headphones in case the baby starts crying?

Stephen Colbert appeared to parody all the home interviews by giving “The Late Show” monologue while immersed in a bubble bath and wearing a suit and tie. His toilet and upscale bathtub fixtures were in clear view.

“You’re watching a very special social-distancing edition of “The Late Show,’” Colbert said. “People all over America have hunkered down in their own houses to ride out the coronavirus. The CDC is saying this might go on for the next eight weeks. So, get comfortable.”

Indeed, many of those interviewed at home have looked exceedingly comfortable.

When Nicholas Christakis, a Yale University professor and author of “Blueprint: The Evolutionary Origins of a Good Society,” was interviewed on CNN, the wide screen shot captivated. It revealed a tastefully decorated room with wood-frame windows offering a view of snow, a packed bookcase and a cozy leather reading chair.

Christakis may be an esteemed author and a great speaker, but this viewer was mostly focused on the warm colors of the room, the yellow blanket on the back of the reading chair and the matching bulls-eye design on the pillow. And was that snowy New Haven out the window?

Speaking from his home in snowy Vermont, Christakis said he has been getting “kind of annoyed by the plebeian background” when he does interviews from his office, so he has ordered a Chinese screen. The painting, he proudly says, is by his daughter.

Most of the backgrounds are far more austere. When reporters are interviewed from home, they are almost always positioned in front of bookshelves, some of them quite messy. Others are suspiciously organized and spare with just a few family photographs and random curios, evenly spaced.

After watching an MSNBC interview with Gadi Schwartz, an NBC correspondent, it was hard not to imagine that a quick cleanup of his living room — and bookcase — had just occurred. The room is pristine and all objects feel upright and perfectly spaced. “You nailed it,” Schwartz admitted in a message sent via Twitter.

Some reporters come across as rumpled, even on TV.

On CNN, David Sanger, the national security correspondent for the New York Times, was shown in close-up while large piles of crumpled papers and shipping tubes lurk behind him.

“I was caught in my natural lair,” Sanger said in an email. “My attic office is a jumbled mess and the only benefit of all this time at home is that I’m finally emptying boxes….”

Some art is so surprising that it can eclipse the interview entirely. At least for those of us given to focusing mostly on the backgrounds.

For a CNN interview, Dr. Emily Landon, an associate professor of medicine at the University of Chicago, appeared seated in front of a black-and-white image of an eerie path disappearing into barren, wintry woods.

Landon’s plea for people to stay home was effective and direct. Still, this reporter got up from the couch and hovered close to the television screen trying to figure out whether the artwork juts out past the edge of the wall and into the hallway.

In the midst of this global health crisis, it’s obviously more important to focus on what the people being interviewed are saying — as opposed to the accidental glimpses into their lives as presented by the rooms they inhabit. But obsessing on the nonessential brings a little levity into our lives and gives us a break from the stress of it all.

These unexpected peeks into other people’s homes reminds me of my favorite work by California artist Ed Ruscha. Letting someone into your home is always complicated.

Kathleen A. Hughes is a freelance writer who lives in Los Angeles and New York.

Sun Apr 5 , 2020
Like Architecture & Interior Design? Follow Us… What happens when artwork takes center stage in a home? Rather than adding art as an afterthought, even a single favored piece can easily serve as a perfect anchor for the rest of the room. The following images explore a variety of ways […] 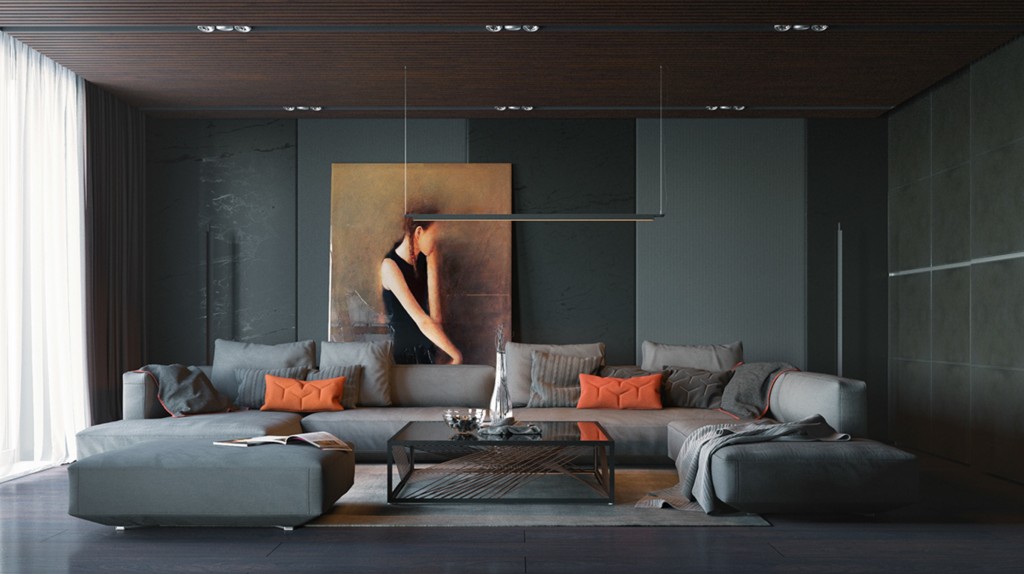