When carolers sing of Christmas, of idealized images of happy families gathered around a warm hearth, they are not singing about our hearth. For my family, Christmas over the past two decades has meant sitting on the couch in sweatshirts or huddled under blankets, wondering why a constantly burning fire […]

When carolers sing of Christmas, of idealized images of happy families gathered around a warm hearth, they are not singing about our hearth. For my family, Christmas over the past two decades has meant sitting on the couch in sweatshirts or huddled under blankets, wondering why a constantly burning fire was doing nothing to raise the room temperature higher than that of a Norwegian ice storm. We joke about living in an igloo, but we know they must be warmer than this.

The house, in a Philadelphia exurb, was new when we moved in in the fall of 1996. And although it would be the first house our family didn’t all live in full-time—more home base than home, with both my older sister and me in college and my younger sister two years away from graduating high school—the family room was and is a central feature. Big enough for two couches, the room has two walls of windows, 15-foot ceilings, and a fireplace. Some families may bond around the dinner table, but we bond in that room. Watching football, playing cards, trying to hide snacks from my mom, who admirably still tries to protect the carpet. It’s a place of familial happiness. Unless it’s winter.

We joke about living in an igloo, but we know they must be warmer than this.

In the winter the cold takes over. When you open the cabinet to get dice (we went through a strong Yahtzee phase), you feel the temperature difference on your hand. Walk by the fireplace and you’ll swear the flue must be open, even though you just closed it. The draft is constant —and somehow everywhere. We tried everything we could think of to fix the freezing temperature. My dad lined the cabinets beside the fireplace with Styrofoam insulation. Didn’t help. We duct-taped the French doors that lead to the screened-in porch to stop the warm air from escaping. Nothing. We lined the recessed lights with Saran wrap. One year, after we’d stopped caring about aesthetics, apparently, I came home to find a bright red curtain hanging in the 6-foot opening between the family room and the kitchen. Later, when it was time to replace the furnace and air conditioner, we had them add air-return ducts to just that room, hoping that it would pull the cold air out. That had to do something, we figured. Like everything else, it didn’t. The room was still cold.

This year we gave up. We got help. In early August Lee Stoltzfus of Foam-Tech Insulation Service in Gordonville, Pennsylvania, with the help of my parents, packed up everything from the mantel and bookshelves—including our 1986 edition of the World Book Encyclopedia, probably the first time it’s been touched since we moved in—covered the room in plastic, pushed all the furniture away from the basement walls below the family room, and got to work.

A lot of the trouble in the family room starts with the fireplace, Stoltzfus said, which was apparently never properly insulated. Fireplaces should have a drafting system. As the smoke and heat come up through the chimney, that air is replaced from the outside and drawn back to the fireplace, creating a circular draft. Installation requires a 2-inch gap around the pipe that runs up from the fireplace, but ours had nothing like that. It was simply open space. Cool air was flowing back into the house, and, instead of going into the fireplace to be heated and released outside, it was going into the bookshelves and then out into the family room.

Stoltzfus and his crew fixed this by putting 2-inch fire-resistant ceramic insulation around the chimney. They wrapped that in a second layer of insulation that acted as a spacer. After spraying foam over the spacer and allowing it to expand, they removed the spacer to leave the gap—and to give us a functioning chimney draft. To further insulate the room from the chimney, they created a false wall using landscape fabric. Stretched out between the sides of the bookshelves and the fireplace, the fabric allowed them to spray 2.5 inches of 2-pound foam (with an R-value performance, or measure of insulating power, of 18) between the two structures without building a makeshift plywood wall.

Stoltzfus had cut an exploratory hole in the drywall between one of the bookshelves and the fireplace. That gave him access to the ceiling, where he immediately found dark shadows of condensation on the ceiling drywall, caused by the temperature changes as air flowed through the fiberglass and around the ceiling trusses. To stop this, he pulled the fiberglass off the ceiling surface.

Stoltzfus was thrilled to find out that there was plenty of room between the ceiling and the roof. That allowed him to switch our vented system—which released the hot, moist air of the “attic” above the vaulted ceiling to the outside, and, in our poorly sealed house, caused the family room to constantly draw in cold air to replace the escaping heat—to an unvented system that he said would greatly increase the warmth of the room. The crew sprayed R54 foam insulation all over the roof of the attic and onto the soffits to completely close things off. This brought the attic into the “envelope,” or the portion of the house controlled by the climate system, which fixes the condensation issue since there is now less movement of air between the family room and the attic. It also should knock at least 35 percent off our heating bill by relieving a bigger problem: the stack effect.

The stack effect happens in all buildings. As heat rises, it increases the air pressure on the higher floors. That air escapes via vents, cracks in the structure, or the open windows of residents frustrated by the temperature. Cold air rushes in on the ground floor to replace whatever is lost above. (This is actually why revolving doors were added to high-rises. With such a large stack effect, the air rushing to get in the front door can make a traditional door nearly impossible to push out and open.)

When he looked around the bookshelves, Stoltzfus found that con densation had caused mildew in the fiberglass we’d added. (This was bad news, but it was also a relief: For years we’d been trying to find the source of the slight smell in the front corner of the family room. We had looked everywhere, cleaned everywhere. Eventually we just didn’t let guests sit in the chair there.) Other than the putrid Styrofoam, there was no insulation at all around the bookshelves. Stoltzfus filled behind, above, and below the area with half-pound foam.

Protective suits worn by the insulation crew are individually air-conditioned.

Our basement is unfinished, with cinder-block walls and uncovered joists.

After spraying under the fiberglass lining the ceiling, Stoltzfus insulated the rim joists around the perimeter. Since our house is on a hill, nearly half of the walls are above grade. Using an infrared sensor we discovered that a lot of the cold air was being drawn in through these walls. To fix that, he sprayed just under 2 inches of foam (any more than that and you’re taking up useful space in case a future owner wants to put up a real wall) and covered it with a flame retardant. Stoltzfus did warn that there might be up to two weeks each year when it gets so cold outside that these walls will sweat, but after freezing for 19 years, we figured we could handle it.

This story appears in the November 2015 issue of Popular Mechanics

A Second Chance: From Raw Basement to Family Room

Sat Apr 11 , 2020
Valuable Real Estate Photo by Erik Rank In the quest for extra square footage, a dry, unfinished basement is a holy grail. For the cost of some finish work and mechanicals upgrades, you can get a whole new room, sometimes two or three. For years kitchen designer Karen Berkemeyer used […] 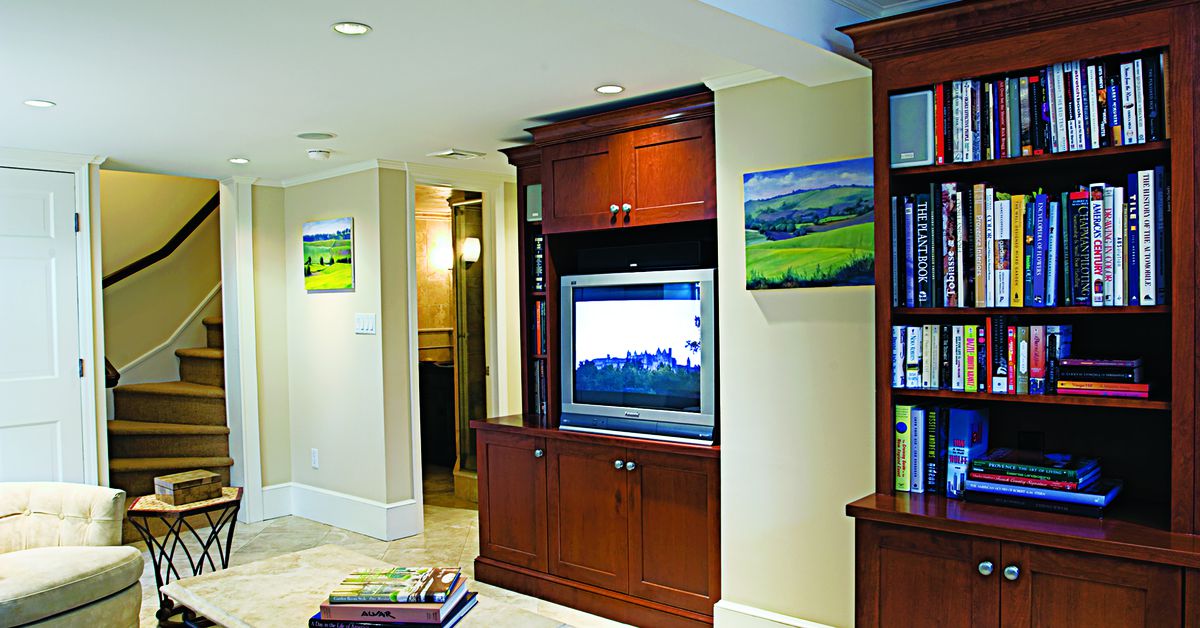