Home & Garden Decorating How to Use Lighting as an Interior Design Element By Katharine Kaye McMillan, Patricia Hart McMillan You don’t have to know everything about lighting or spend tons of money to make rooms look light and lively. You do need to know the basics of functional and […]

You don’t have to know everything about lighting or spend tons of money to make rooms look light and lively. You do need to know the basics of functional and decorative lighting and how to get help for planning and buying lighting. Lighting design is broken down into three kinds of illumination: general lighting, task lighting, and accent lighting. Mix all three types to achieve decorative lighting. 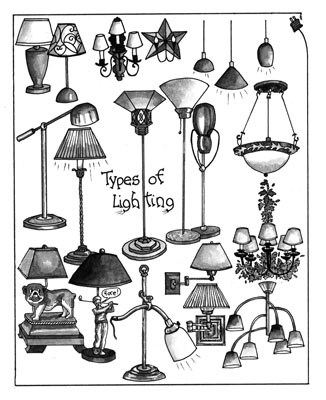 Decorative lighting creates mood (an overall feeling of serenity or playfulness) and meaning (communication; sometimes this includes signage, such as Exit). Flat, functional lighting (such as the kind in your office) puts people on the alert. Decorative lighting, on the other hand, brings out the shape of objects, the “feel” of texture, and important keynotes.

A decorative lighting scheme has variation in light levels and sources that indicate what rooms are for (dim lights in rooms for sleeping, bright lights in playrooms) or what a room’s focal point is.

Create focal points with chandeliers and pendants. In a dining room, for example, a chandelier placed over a table draws attention with its soft upward-cast light. (Chandeliers are Traditional.) A pendant light used over a table, however, casts a more concentrated light downward and out. (Pendants are Contemporary.)

To create a plan, consider what, where, and when activities take place. Lighting needs to vary its intensity to accommodate multiple activities that occur in a single room. For example, your kitchen may be your favorite place to cook, read, do your hobbies, watch TV, and entertain. Would you want the same level of light for a party that you want for mopping the floor?

Lighting stores and home remodeling centers have trained personnel who can steer you toward your best possible lighting choices. Bring your floor plans and other decorating notes with you when you consult a lighting expert.

General, or ambient, lighting illuminates an entire space for visibility and safety. Light bounces off walls and ceilings to cover as much area as possible. General lighting can come from up-lights or down-lights:

Task, or work, lighting illuminates smaller areas where more intense light is needed. Task light should be three times as bright as general lighting. Overly bright work lamps won’t make up for a dimly lit room (instead, you may develop eyestrain). Using higher light per watt (LPW) bulbs in other fixtures or increasing the number of fixtures to boost general lighting fixes this problem.

Accent lighting adds brilliant shimmer to make your precious objects, paintings, sculptures, and outstanding architectural features stand out. Use a bulb that’s no more than three times as bright as the surrounding general light. Position the fixture so that the light doesn’t block your line of sight so that no glaring reflections bounce back.

Halogen makes the best accent light because of its intensity and brilliance.

About the Book Author

Katharine Kaye McMillan, former senior editor of a New York City-based national magazine, is a writer whose work appears regularly in magazines and newspapers. She is a contributing writer to internationally circulated Florida Design Magazine. She is the co-author of several books on decorating and design, including Sun Country Style, which is the basis for licensed signature collections of furniture and accessories by three leading American manufacturers and importers. A graduate of the University of Texas in Austin, she holds a masters degree in psychology and is a doctoral student in psychology at Florida Atlantic University, Boca Raton, Florida.

Patricia Hart McMillan is a nationally known interior designer, whose interior design work for private clients, designer showcases, and corporations has appeared in publications worldwide, including the New York Times and USA Today. Known as a trend spotter and for clearly articulated views on design, she is quoted frequently and extensively in both trade and consumer publications. She a ppears on TV and talk radio. A prolific writer, she is coauthor and author of seven books on interior design and decoration, with Sun Country Style signature collections of furniture based on two books. She has taught decorating courses at several colleges and conducted numerous seminars across the U.S. She is decorating editor for Christian Woman Magazine and reports on design trends for The Sun-Sentinel, a Tribune newspaper based in Ft. Lauderdale, Florida. She has been editor-in-chief of two publications and was head of a New York City-based public relations firm representing some of the most prestigious names in home furnishing and building products. She holds a Bachelor of Arts degree in English, with a minor in art history (with an emphasis in architecture), from the State University of New York (New Paltz). She was awarded a certificate from The New York School of Interior Design.

Fri Mar 27 , 2020
The Bachelor of Design (BDes) degree is a four-year degree that offers three tracks for specialization: Products (industrial design), Communications (graphic design), and Environments (both physical and digital). Our curriculum emphasizes the importance of designing for interactions between people, the built world, and the natural world. (Learn more about our […]