With the coming of 2011, we’re not only seeing the beginning of a new year, but a new decade as well. Many things have changed over the course of the last ten years — politically, economically, and culturally. We spoke with architects and designers nationwide to see what design trends […]

With the coming of 2011, we’re not only seeing the beginning of a new year, but a new decade as well. Many things have changed over the course of the last ten years — politically, economically, and culturally. We spoke with architects and designers nationwide to see what design trends and ideas are here to stay and what recent events have shaped the exteriors of residential building.

An incredibly important point was brought up by Philadelphia-based architect Jeff Krieger of Krieger + Associates Architects Inc: “This is my philosophical take on things. I’ve always said the study of architectural history is a way of evaluating cultural beliefs and values. You can look at a building and understand that it is a reflection of society’s values and there really is a shift going on over the last two generations from the post-war [period].” He discussed the small, affordable, modest homes of the ’50s and ’60s, the ostentatious McMansions of the ’80s and ’90s, and the evolution of the home in the last couple of decades. Times are changing, and, as Krieger so aptly puts it, “You see it first and foremost in residences.”

The recession has undeniably hit the country hard and has had many effects, including slowed development, job loss, and simpler design. When I asked Krieger how he would describe the current American home, he answered, “I would say ‘smaller, simpler, and low-maintenance.’ There are simpler designs because I feel that’s becoming more appealing — harkening back to a more family-centered, stay-at-home lifestyle. People don’t need as many possessions, and their house is a reflection of who they are. So simpler designs, less materials seems to be a better expression of how we live and where we are in this economy. Smaller is just more economical, more energy-efficient, easier to maintain, and practical.” As the old adage goes, time is money — and when money is tight, low-maintenance becomes important.

“We still see a lot of clients trying to make very rational decisions. We see people putting money into their house, but we see them willing to pay a premium if they know that something is going to be more efficient, easy to maintain, and have a longer lifecycle. It seems as though consumers are getting much more conscious of that decision-making, as they are more practical, but at the same time more efficient, and get the most for their money.” Robert Donaldson, MOD{all} Studio

Jane Frederick of Frederick + Frederick Architects has seen a clear trend in preference for smaller houses. “The last three houses that we’ve done have all been under or right around 2,000 square feet,” Frederick says. “I think the economy might be part of it, and what I think was most appealing was that they like the detailing — you don’t really need big spaces, but customize the house to you. I think people are thinking more about how they are living in their house, and creating just the spaces they need rather than the spaces they think they need for resale.” She also cites a rise in the interest in more contemporary houses with cleaner lines and less ornate detailing on the exterior.

The simplicity of the home, of course, results from a variety of factors. Smaller homes encourage energy efficiency in terms of cost savings, as well as a continuation of the sustainable design we’ve seen over the course of the last few years. It seems, however, that Americans are focusing less on stuff and more on quality and are certainly getting the most bang for their buck.

Designing for the Long Term

Along with economic struggle comes a slowing of new development. As a result, people are investing more in their current homes rather than building new or moving. One result, as Krieger mentions, is that remodeling is on the rise: “The economy has greatly affected what we do. People that still want to make improvements on their homes want to remodel rather than spending a lot of money on a new addition. We’re not going to see much appreciation on home value in the next coming years, so they’re not spending as much money on major remodels, but smaller ones — like kitchen remodels.” It would seem that, along with simplicity, people are trying to be more contented with what they have and build homes suited to their needs.

We see homeowners, too, thinking in the long term when it comes to these improvements. Robert Donaldson of Cleveland, Ohio-based architectural firm MOD{all} Studio explains, “We still see a lot of clients trying to make very rational decisions. We see people putting money into their house, but we see them willing to pay a premium if they know that something is going to be more efficient, easy to maintain, and have a longer lifecycle. It seems as though consumers are getting much more conscious of that decision-making, as they are more practical, but at the same time more efficient, and get the most for their money.” Whereas the housing boom of years past spawned mobility, permanence has replaced instant gratification.

In this line of investment, Frederick has also noticed a big shift toward region- and climate-specific design elements making their way into exteriors: “One trend that we’re seeing, especially in hot humid climates, is a lot of advancement in building systems. Buildings are changing to recognize different climatic situations, and designing according to these differences. One of the things for us in South Carolina is making sure that the water gets out — because it’s going to get wet. How you put your system together is very important. We’re seeing more durable materials, and those materials are being customized to different areas in the country, focusing on the region.”

One of the key trends we can see in residential exteriors is the sophistication and growth of outdoor living space. Frederick mentions that the design of houses is increasingly becoming more tied to the land, including landscaping that incorporates native plants and space for appreciating the surrounding scenery. “The outside of the house is expanding — terraces, outdoor porches are becoming larger. People are creating multiple outdoor spaces. I think the outdoor space is growing as the houses are shrinking, partly because it is less expensive space to create. We continue to see outdoor kitchens, or if not full-size kitchens, a designated grilling area with counter space dedicated to the grilling process,” Frederick explains.

These backyard entertaining areas are a great way to provide transition between the inside and the outside — connecting the interior of a home with its natural setting. The exterior space in the front yard is evolving or rather devolving into a connection between the private and public that we haven’t seen in decades. Donaldson discusses the rise in popularity of the front porch. “We’re not sure if it’s because of the recent recession, kind of going back to the ways of our grandparents or what have you, but we are definitely seeing an increased interest in the porch. There’s just a romanticism about the porch,” Donaldson says. He went on to discuss a community art project his firm spearheaded for a Cleveland, Ohio, community that experienced a gas line explosion at the beginning of the year. He described the role of the porch in that particular neighborhood and how it facilitated interaction: “It’s a nice thing to see people actually out on the street, whether they are just enjoying scenery or talking to neighbors, there’s something comforting about that neighborhood. Having a very small front porch or just a front door in a suburban context, you frankly feel like rather than a front door you are turning your back to the neighborhood. The amazing thing is that with a real porch, you can just look to the left or the right. It’s great. There’s something mystical about it.”

Donaldson’s partner at MOD{all} Studio, Jim Fish, found it a refreshing response to recent trends toward social media and communication. “I think there’s just a trend with people getting more and more inward. They’re spending more time connecting with others, but connecting in a very impersonal manner. So something like the front porch, or the sidewalk, or the front yard is like a counterpoint to the idea of closing yourself in and being alone and less personal. People think, ‘Oh, I can be on my own and alone. I can text and I don’t have to interact on a person-to-person basis’ until something happens, like that explosion. Everyone ran out of their houses, and because of that they started having conversations. They started coming up with an emergency plan. They started trading phone numbers in case something happened and they realized that they did need each other, and they did want to interact with each other. Unfortunately it was something like that that made it happen. Hopefully it doesn’t have to be that way on every street.”

Dozens of trends are taking place with regards to the exterior of residential buildings. Technology and an increasing interest in sustainability have driven a wealth of research, implementation, and demand for green materials and energy efficiency. There’s no reason, however, to ignore the parallels we see among sustainability initiatives and other influential values that permeate architecture and design. It seems like the times really are changing, and with them the American Dream — a dream that is perhaps a bit nostalgic and hungry for a healthier, friendlier, and simpler future.

Fri Apr 24 , 2020
The dining room is the space in which one shares meals with family, friends, birthday celebration, among other various experiences that occur daily in a home. The color used to decorate it varies according to the tastes of the people and the fashion trends of the time. That’s why we’ll […] 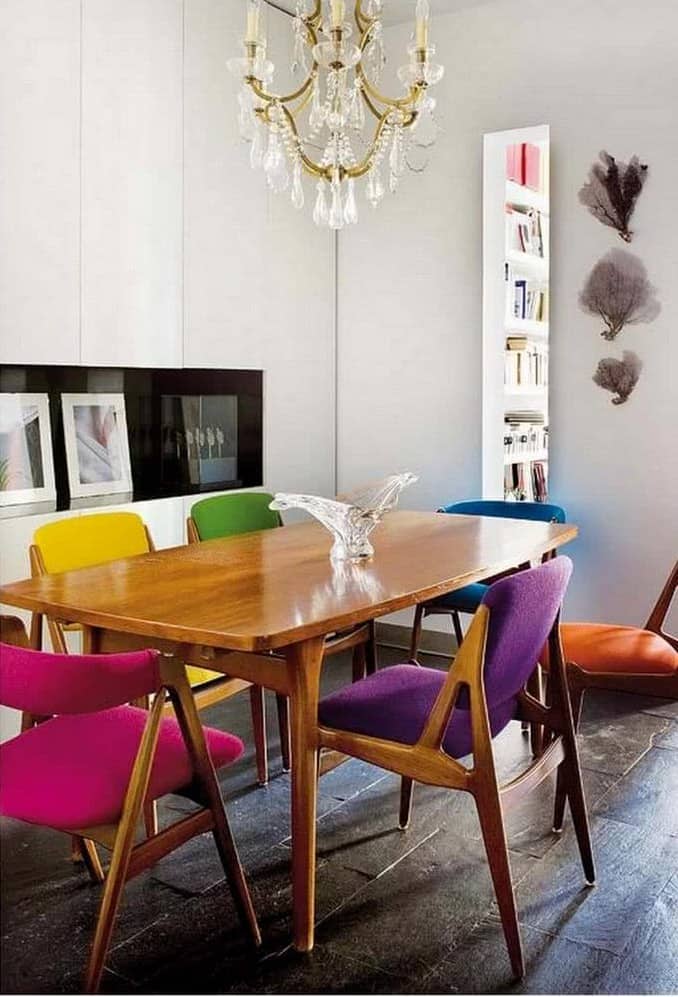